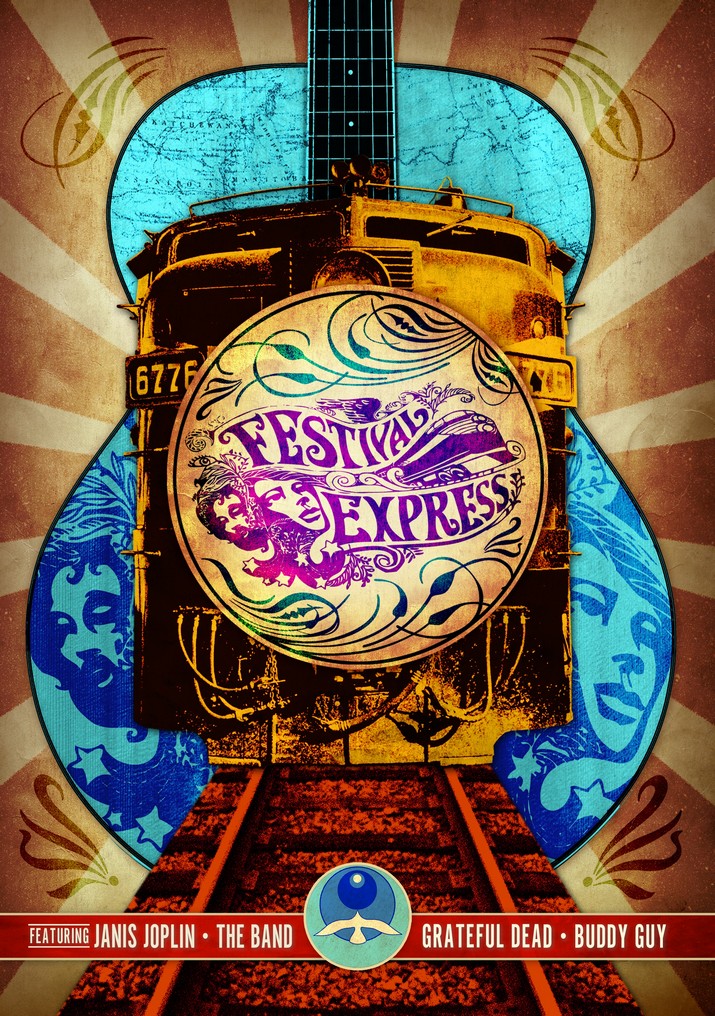 Should rightfully take its place in rock history as one of the great performance films of all time.
The Hollywood Reporter

Festival Express is a spellbinding documentary that nostalgically chronicles five days in the summer of 1970, when a train full of now- legendary rock performers jammed its way across Canada.

The tour was unique in that rather than flying to each city, most of the acts traveled on a chartered train. The Grateful Dead, Janis Joplin (with her Full-Tilt Boogie Band), The Band, Delaney & Bonnie and Friends, The Flying Burrito Brothers and Buddy Guy Blues Band all jammed, drank, slept and rode the train in between playing shows in Toronto, Winnipeg, Saskatoon and Calgary.

The chartered Canadian National Railways train consisted of 14 cars, equipped with lounges and sleeping compartments, with electricity sockets so that musical instruments could be plugged in. Allegedly, during the trip, a coke-fuelled Jerry Garcia talked his way into sitting in the driver’s seat and was left at the controls, regularly sounding the train’s whistle.

The train journey between cities ultimately became a combination of non-stop jam sessions and partying, fueled by alcohol. One highlight of the documentary is a drunken jam session featuring The Band’s Rick Danko, Jerry Garcia and Bob Weir from the Grateful Dead and Janis Joplin.

Unsurprisingly the passengers drank the bar dry and, as is shown in the film, the musicians passed around a hat and the train made an unscheduled stop to find a liquor store for much needed supplies. I seem to remember that, much to the bemusement of the owner, they bought most of the contents of the store.

The tour featured now-legendary performances by the Grateful Dead, The Band and Janis Joplin. The Dead were in the process of transforming their sound from dense, jammed psychedelia to the country/folk harmonies of Workingman’s Dead and American Beauty, The Band’s performance showed them at the pinnacle of the their powers and for Joplin, it would turn out to be some of her last performances, as she died two months later.

Over the years the Festival Express footage mysteriously disappeared. Some of the film’s reels turned up in the garage of the original producer Willem Poolman, where they had been stored for decades and used at various times as goal posts for ball hockey games played by his son Gavin who in 1999 hatched a plan to resurrect the film, and many more reels were found in the Canadian National Film Archives vault, where they had been kept in pristine condition. Director Bob Smeaton (The Beatles ‘Anthology) was hired, and the eventual finished show was premiered in 2003, grossing more than $1 million in movie theatres before being released on DVD to much acclaim.

Festival Express seems to step directly out its period and is guaranteed to thrill both survivors of those times and younger viewers who may know little of them.
NY Times

Captures not only top-notch stage performances by some long-gone supertalents in their prime, but happy jamming and general good fun in the club cars between gigs.
Los Angeles daily News

One of the great rock ‘n’ roll movies, a treasure trove of music and a wildly entertaining chronicle of a vanished time.
Chicago Tribune

Should rightfully take its place in rock history as one of the great performance films of all time.
The Hollywood Reporter

Given the heavy concentration of old folkies, the on-train jams are fascinating.
Village Voice

A delirious piece of pop ephemera, a time capsule set on the cusp between the Summer of Love and the Day the Music Died.
Washington Post

Here’s a chance to listen to the soundtrack for the social upheaval of the late ’60s and early ’70s.
Atlanta Journal-Constitution

It is a rough jewel unearthed, and if you care at all about the era, it will shine for you.
Detroit News

Available with Special Bonus Features – Off The Tracks – Never Before Seen Footage
With more than 50 additional minutes of exclusive performance footage not seen in the theatrical version of the film, the Festival Express DVD set features the following “bonus” set list:

Mashmakhan “As Years Go By”